The Highlights of Ephesus 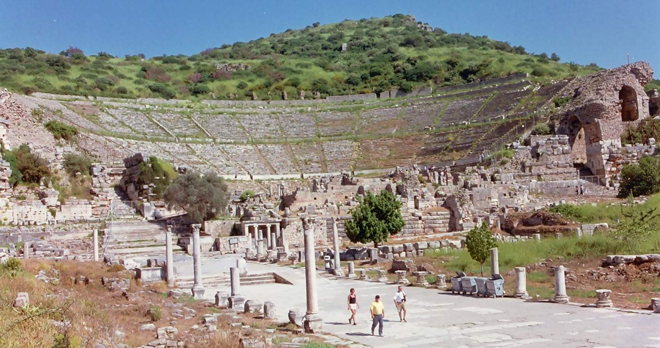 After a short drive scenic drive, visit to the House of Mother Mary where she is supposed to spend her last years together with St. John; Then to Ephesus is the best-preserved ancient city in Turkey, famous for its Celsus library, great theatre, marble streets, temples, and baths. It’s situated in the fertile Ionian landscape and has been known throughout history for its temple of Artemis, one of the Seven Wonders of the World. Ephesus is considered to be the showpiece among all the antique cities of the world. After lunch in the town of Selcuk visit to St. John’s Basilica and Ephesus Museum. Then drive back to Hotel

This is a private tour and includes a driver and a separate English-speaking guide who will accompany you into all attractions to provide commentary.

95 euro per person (when group size is 2 persons)

80 euro per person (when group size is 3 persons)

75 euro per person (when group size is 4 persons)

Although ancient writes claim that the name of Ephesus derives from an Amazon Queen’s name, the archaeological finds reveals that The Carians and Lelegians, the native peoples of Anatolia, had settled here long before the Ionians’ arrival. Ephesus was first established in 6000 B.C and grew up around the Temple of Artemis. The Ephesians started to move to the new city built by Lysimachos in the 3rd century B.C. The following is the list of the various ruins of Ephesus as they appear from the upper gate, which leads to the House of Virgin Mary, to the lower gate.

THE MAGNESIAN GATE
This is the only city gate that survives up to the present day. There is not much thing to see today.

THE EAST GYMNASIUM
The East Gymnasium, one of the monumental structures of Ephesus, the gymnasium, is a complex that includes baths, palaestrae (exercise fields), study halls, and imperial cult rooms. According to an inscription it was built by famous sophist Flavius Damianus and his wife Vedia Phaedrina.

THE VARIUS BATHS
The Varius Baths were constructed in the 1st century B.C. During the excavations, parts of a bath and a roman latrine came to light. These structures next to the bath might belong to a gymnasium that may have been part of the complex.

THE WATER SYSTEM AND NYMPHENIUM
The water springs are rather away from the fountains and houses in Ephesus. This monumental fountain on the street bounding the south side of the state was supplied by the Marnas River. The large fountain is well integrated into the street that fronts it. This monumental fountain was built between 4-14 A.D., and underwent various renovations the last of which was in the fourth century.

THE STATE AGORA
The state agora, measures 160 X 73 meters and was constructed in the 1st century A.D. It was the place the location of official religious and civic ceremonies, of government assemblies, and of the mercantile activities of the larger trading concerns that were subject to government regulation.

THE ODEION
This structure was devoted both to civic meetings and musical and theatrical performances. It seated 1400 people, and was constructed by Vedius Antonius and his wife Papiana in the second century A.D.

THE PRYTANEION
The Prytaneion (town hall ) was considered to be the sacred place of the city. It contained the altar of Hestia Boulaia, where a sacred fire burnt perpetually for centuries and was never extinguished. This the find spot of the two great statues of the Ephesian Artemis which are displayed at the museum now. The building was built in the 3rd century B.C during the reign of Lysimachos. The ruins seen today are dated to 1st century A.D. Two later temples near the site were dedicated to Emperor Julius Caesar and Dea Roma, the divine personification of the city of Rome.

THE WATER PALACE
It was built by proconsul Laecanius Bassus in 80 A.D., and is also called the “Water palace" because of its monumental appearance.

THE MEMMIUS MONUMENT
Memmius was one of the grandsons of Sulla, the famous Roman general. This monument dedicated to him was constructed in the first century A.D. during the reign of emperor August. A fountain was built into the northwest corner of the monument in the fourth century A.D.

THE TEMPLE OF DOMITIAN
Dedicated to Domitian, this is the first structure in Ephesus to be built in honour of a Roman emperor. The temple was erected on a terrace supported by a substructure measuring 50 by 100meters. The substructure of the temple is used as "Inscription Gallery" today.

THE POLLIO FOUNTAIN
This structure dedicated to C.Sextilius Pollio in 97 A.D. It was decorated by the statue group of Odysseus and Polyphemus, and a basin stood in front of it.

THE GATE OF HERCULES
Just before the Street of the Curetes stand the remains of ancient gate known as the Gate of Hercules. This name arises from the figures of Hercules on the western faces of the two extant pillars. The capitals of the columns were decorated with acanthus leaves. Presumably these pillars, along with four others were standing on the beam above the arch of the gate.

THE STREETS OF KOURETES
Owing to the fact that this street was used by a six-membered-class of civic priests, who were chosen anew each year, and played an important role in the management of the city, it was given “Kouretes Street. The porticoes flanked both sides of the street, which provided shade for pedestrian, and behind of which were located the various shops. The street was lined by statues of prominent Ephesians. After three severe earthquakes hit the city in the 4th century A.D. the street was restored. The main sewer system in Ephesus lies beneath this marble pavement of the street.

THE FOUNTAIN OF TRAJAN
It was dedicated to the emperor Trajan (98- 117), and constructed between 102-114 A.D. The two storied fountain had a colossal statue of Emperor Trajan in the middle.

THE SCOLASTICA BATHS
The first construction on this site dates to the first century, and was later connected to the brothel and the latrine. The three storied bath dates to 400A.D. comprises a various rooms for bathing and lounging along with a library and has a capacity of 1000.

THE LATRINE
The general toilets had a square pool in the middle surrounded on four sides by toilet seats, in front of which was a channel of running water. The floor of this place was covered with mosaics.

THE HADRIAN TEMPLE
The Hadrian Temple is one of the most impressive constructions in Ephesus. It was dedicated to the Emperor Hadrian (118-138 A.D.) The relief of Tyche, the goddess of city, is seen on the pediment of the temple. The legend about how Ephesus was established is also depicted on the friezes of the temple.

THE SLOPE HOUSES
These two or three storied houses belonged to the wealthy people of Ephesus were first built in the 1st century A.D. They were used as dwelling, with some renovations and repair until the seventh century. The walls were garnished with frescoes and the floors were decorated with mosaics.

THE BROTHEL
This two storied structure built during the reign of Emperor Trajan, forms a complex with the Scholastica Baths the latrines. The walls were decorated with frescoes and the floor was covered with mosaics.

THE LIBRARY OF CELSUS
The Celsus Library was erected in A.D 135 by Julius Aquila for his father Julius Celsus Polemaeanus, the consul of Asia province of Roman Empire. The library, measuring 60.90 by 16.72 meters had a two storied facade and a large room inside. Its facade contains exemplars of architectural elements that are among the most beautiful ones of the period, such as doors, windows, gables, niches and columns. A gap of one meter between inner and outer walls of the the library protected the books from extremes of temperature and humidity. The sarcophagus of Celsus stand under the west side of the library. Four female statues standing between the columns personify the virtues of Celsus: Sophia (wisdom), Arete (virtue), Ennoia (intelligence), Episteme (knowledge). Celsus himself is buried in a sarcophagus beneath the west side of the library.

THE GATE OF MAZAEUS AND MITHRIDATES
This gate to the Agora was erected in 4-3 B.C by the freed slaves Mazaeus and Mithridates in honour of their former masters emperor Augustus and his family.

THE COMMERCIAL AGORA
The commercial agora , one of the significant centres in Ephesus was the real market place for trade in Ephesus. It was square and enclosed on all four sides by stoas. The agora was set up during the Hellenistic age and rebuilt during the reign of Emperor Nero and again in the 3rd century A.D.

THE TEMPLE OF SERAPIS
A path with a flight of stairs at the southwest corner of the Agora leads to the Temple of Serapis. The temple was rising on a high terrace .This prostyle temple had columns in the Corinthian order, each of which had a diameter of 1.5 meters and a total weight of 57 tons.

THE MARBLE ROAD
The sacred way that surrounds the Panayır Mountain is called the marble Street here, and is well preserved. The road was intended for vehicles, since pedestrians could use the colonnade. The huge sewer system of the city, which had a channel large enough to be entered by a human being also was running under this street.

THE GREAT THEATRE
It is situated on the slope of Mount Panayır. It was first built in the Hellenistic times and renovated in the 1st and 2nd centuries A.D. It seated 24.000 spectators. The stage building was three storied and rose to a height of 18 m. The cavea, the seating area, had consisted of three superimposed sections. The theatre was the scene of gladiatorial fights during the late Roman period.
During the early years of the Christianity, St.Paul who came to Ephesus to spread Christianty and he wanted to address to the crowd at the theatre. The silversmith Demetrius provoked the people against St. Paul because he earned a lot of many with his handmade Artemis statues and they shouted altogether “ Artemis of Ephesus is great, The greatest is Artemis”. So St.Paul was forced to leave Ephesus and he continued his journey to Macedonia.

THE ARKADIANE (HARBOUR) WAY
It was constructed in late Hellenistic period and renovated by the Emperor Arcadius (395 - 405) and known by his name. It is 500 m. in length and 11m. in width The shops were located on both sides of the Arkadiane way. It is also known as "Harbour Way"

THE THEATRE GYMNASIUM
This structure was built in the early period of the Roman Empire. Since it is situated next to the theatre it is also called "The Theatre Gymnasium" It is the largest gymnasium at Ephesus

THE HARBOUR GYMNASIUM AND BATHS:
There were two palaestras (athletic training grounds), one of which was 90 sq.m area and the other 200mx240m. The structure was built in the reigns of Emperors Domitian and Hadrian. The baths were erected in the second century. Since the baths were renovated in the 4th century they were also called “The Constantines Baths".

THE CHUCH OF VIRGIN MARY (THE CHURCH OF COUNCILS)
This church, one of the important edifices of Christianity, is the first church which was dedicated to Virgin Mary. The third meeting of the Ecumenical Council was held in this church in A.D 431.

THE STADIUM
The stadium measured 230mx30m and resembled a horse-shoe. The entrance was in its west facade. Seats for the spectators on the south side were constructed on the slopes of Mt.Pion while those on the north were built over a vaulted substructure .The first site of the stadium appears to go back to the Hellenistic period, and during the reign of the Emperor Nero (54-68 A.D.) it underwent transformation.

THE VEDIUS GYMNASIUM
The gymnasium, one of the preserved buildings to be found in Ephesus, was erected in A.D 150 by P.Vedius Antonius, one of the prominent wealthy Ephesians of the time and dedicated to the Emperor Pius and the goddess Artemis.